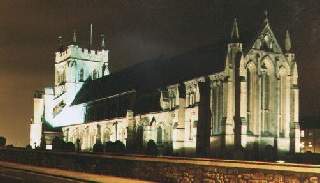 A prominent feature of the Headland, St Hilda's church was built in the late twelfth century but the south doorway shows in its decoration that it belonged to an earlier Norman church, probably erected in the time of Robert de Brus II, founder of Guisborough Priory. Like most ancient churches, St Hilda's contains architecture of different periods and styles but the nave and tower are the oldest sections.

There was a monastery, founded by St Aidan, on the Headland as early as AD 640. The first abbess was St Bega. In 648 she was succeeded by St Hild (Hilda in the Latin version). Hild remained here for ten years and then proceeded to Whitby, where she died in 680. It is tempting to blame Viking raids for destroying the monastery in the early 9th century. However none of the excavated sites show any signs of a Viking onslaught. The archaeological evidence suggests abandonment as the Northumbrian monasteries fell apart in the political troubles of the late 8th century. (Tees Archaeology: click here for their web site )

Among the knights who came with William the Conqueror in 1066 was Robert de Brus. His son married Agnes, the daughter of the Lord of the Manor at Hart, thus starting a connection with Hartlepool which lasted for many generations. It is generally believed that St Hilda's was built by the grandson of Robert and Agnes, Robert de Brus IV - hence the Bruce Chapel and Tomb.

The architecture of St Hilda’s in context: Downloads: